The memories embedded in knitting and sewing 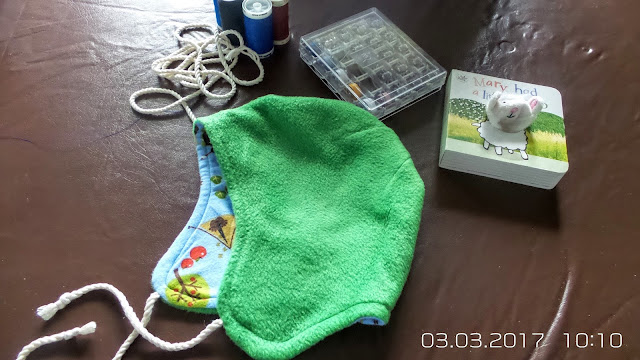 This is the warm  hat I have made for my 7 month old Grandson Hugo this week, which hopefully will keep his little head warm when they travel to Denmark and France later this month. It should still be quite cool then. Once I got started, and became used to Burda's style of instructions it was quite easy. I am starting to really feel like a retiree, and am enjoying the challenge and relaxation that sewing and knitting brings to my life. However  cooking is still very much on my horizon.

Knitting has become a regular part of my daily routine as well, and fills the gaps nicely, which really surprises me. I have never really been what I would call a successful knitter but  I have been going really well with this Waffle knit pattern and actually made the last dishcloth/face washer without a mistake, or the need to pull some out and redo it. I am enjoying the challenge, the tactile process, and the thrill of creating something from nothing. It's never too late to start.

The Waffle Knit Pattern can be found here,  I first found it on Rhonda's Down to Earth blog.
http://homespunliving.blogspot.com.au/2007/11/waffle-knit-dishcloth-pattern.html

This morning we were waiting patiently to see the segment with Hugh Sheridan on the ABC News Breakfast programme, as I like following his career. He is an extremely talented young Australian singer , actor and dancer, the whole Triple Threat scenario really. So whilst I was waiting for the segment to show, I kept knitting while the Man of the House was talking to me, and then finally Hugh Sheridan's interview came on. During the interview, and with a total loss of concentration on my knitting, somehow I managed to create an extra stitch. So I am blaming Hugh for my knitting mistake this morning, although it was worth it to see his interview, and I wish I was in Sydney tonight to see his concert. However I suppose the lesson learned from that story is to put your knitting down and focus on what you are watching, even though I am so used to being able to multitask.

Anyway I  pulled out a row and I thought I had corrected the problem. I am still not that skilled with correcting knitting mistakes as I can now see that there are still a couple of small problems in that row. Fortunately though the vertical rows of the pattern design are still aligned, and this cloth will live in my kitchen and not become a gift as a facecloth or dishcloth. Whenever I look at this dishcloth in the future I will think of that interview. Which makes me think that perhaps memories become embedded in our knitting projects as they continue over time. Do you think that is part of the satisfaction of knitting and handicrafts in general?

I am finding that whilst this pattern looks complicated it really is easy if you can knit plain and pearl and it looks so effective. It is just a matter of concentrating on the task in hand.

Have a nice weekend everyone.


Posted by HAPPY RETIREES KITCHEN at 16:45