Search for the source of your food

I have just discovered this website after reading a very well written article in the Life section of the Weekend Australian today by Laura Dalrymple, about how important it is to know the source of our food, the importance of buying locally grown produce when possible, and not being "anaesthetised by choice and abundance" or by the packaging on foods we buy.


At home, we are growing as much of our own produce as we can in our own backyard, and some of the front yard as well, however it is realistic to expect that in suburbia we are still dependent on purchasing many items from the local markets, supermarkets, or IGAs.


As retirees with more time on our hands, we are swapping or just giving away surplus produce excess to our needs. This not only reduces waste, but it also feels really good to share.


I'll see how the Flavour Crusader website develops, but I am becoming increasingly passionate about this whole issue.

As Laura says in her article, "the decisions we make at the check-out are proving to be the most effective change agent in the retail sector. Never underestimate the power of one." 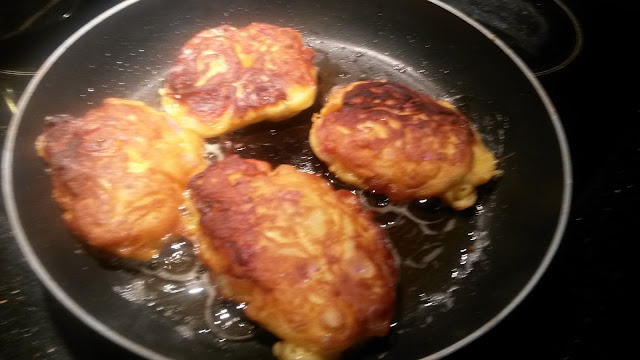 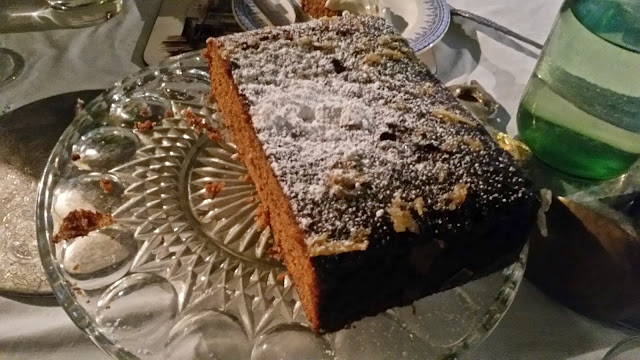 This Ginger cake embraces the sweetness of  golden syrup, and the heat and spice of fresh and ground ginger. It is always a winner with a cuppa or as a dessert, especially as the weather starts to cool down and has always been a favourite cake of ours.

We dug up some fresh ginger from our garden, picking just enough to make the aromatic Ginger syrup.

I offered to take this cake as dessert for our after tennis dinner party, which happened to be our lovely friend Chris's birthday as well. Chris loves ginger, and really enjoyed her birthday cake.

This recipe is taken from David Herbert's recipes, however I have doubled the ingredients to serve it as a dessert with thick fresh cream mixed with Greek yoghurt, and swirled with homemade strawberry jam, or ice cream

Just halve the ingredients if you wish to make a smaller cake in a standard loaf tin. 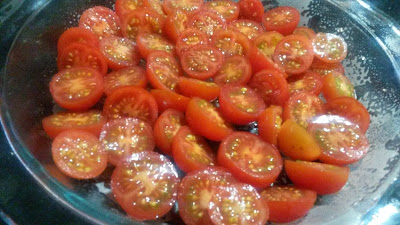 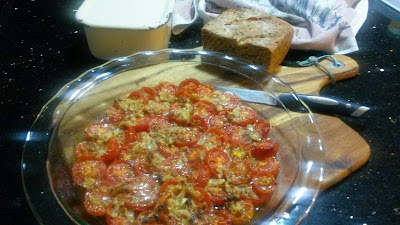 This is such a simple recipe, and although tomatoes are officially out of season at present, I just managed to buy some beautiful cherry tomatoes at the supermarket  at a reduced price because they had passed the use by date, however were still in excellent condition. This recipe is taken from the River Cottage Veg Everyday cookery book, and whilst I am not vegetarian, we are reducing our meat consumption to what it was, and a dish like this marries beautifully with risotto, grilled or roasted vegetables, or just to quote Hugh Fearnley-Whittingstall, "piled on toast with a sprinkling of flaky sea salt on top." Perfect. So simple and so delicious. The original recipe uses 1 tablespoon of honey, however I think this could even be reduced to 1/2 tablespoon if you prefer things a little less sweet like me. This depends on how sweet your tomatoes are as well.

Method:
Preheat the oven to 190 deg. C/Gas Mark 5. Lightly oil a a medium roasting dish or pie dish. Halve the tomatoes and place them, cut side up, in the dish. Ensure they fit snugly with little or no space between them.

Crush the garlic with a pinch of salt, then beat it with the honey, olive oil and a good grinding of pepper. Because I had quite large organic garlic cloves from nearby Eungella, I mashed them up in my pestle and mortar with the salt and mixed the rest of the ingredients in the bowl.

Spoon the gooey, garlicky mixture over the cherry tomatoes.

Roast for about 30 minutes, until juicy and bubbling. 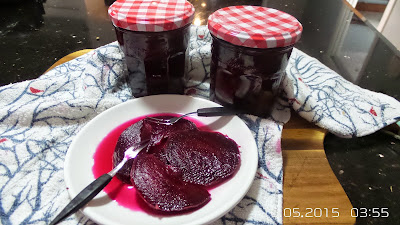 An early trip to the local market in wet, windy conditions, and I arrive home with all locally grown produce. Because of the wet weather, and the temporary relocation of the market stalls to an uncovered area, only the local, noncommercial growers seem to be present today, making it much easier to sift through what is grown locally, versus what the larger commercial suppliers have sourced from down south. There is so much more transparency about what we are buying and eating, if food can be sourced locally, and isn't packaged.

The secret ingredient which sets this pickle apart in flavor and intensity is the cinnamon stick. All the flavors will develop in the jars over the next couple of weeks resulting in a very aromatic and tasty beetroot pickle. I only finished with two jars of pickle, because the the beetroot weren't very large this time. However, there was enough pickling mix for four jars. Your jars will need to be wide mouthed to accommodate the beetroot slices.

I promise you that after making Pickled Beetroot and tasting it, you will never buy commercially canned beetroot again.

Preparing the beetroot for pickling:
Sterilise your bottles:

Posted by Happy Retiree's Kitchen at 00:12 No comments:

Email ThisBlogThis!Share to TwitterShare to FacebookShare to Pinterest
Labels: beetroot, May cooking, pickles

Beef Stew in the Slow Cooker or Crock Pot 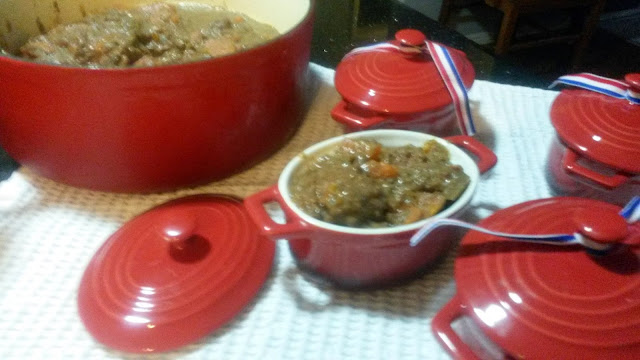 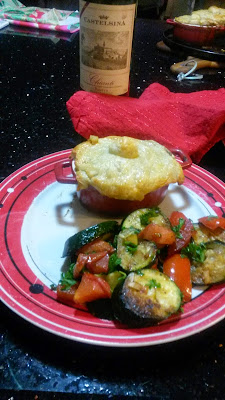 Beef pies, yum, who doesn't like a meat pie?

This very tasty and easy beef stew  can be easily adapted to meat pies or French casseroles served in mini Cocettes, or with the addition of dumplings, can feed crowds of people. Matthew and Myrtille gave me a set of Baccarat mini Cocettes for my last birthday, which I just love, and I  know I will be using them regularly for mains and desserts. Now  that the weather is cooling off in the Tropics, it is time for a good beef stew, with pastry of course. Buy your puff pastry and make either individual beef pies, or a large one. Enjoy the left over beef stew on toast for brekkie the following morning.

As I write this, I am reminded of our visit in April 2015, to Goddards, the famous and historical pie shop established in Greenwich, England in 1890. On a cold day, their hand made meat pies, served with mash and mushy peas, and gravy  make the trip very worth while. 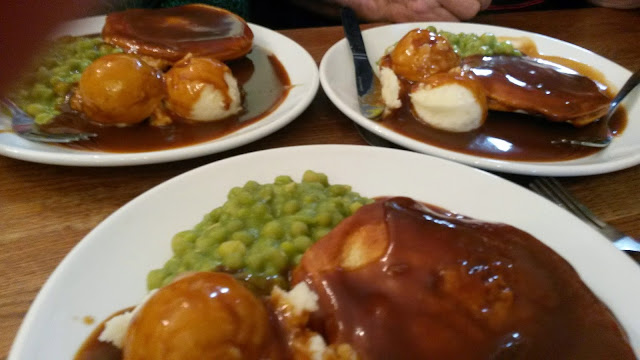 BEEF STEW in the SLOW COOKER or CROCK POT 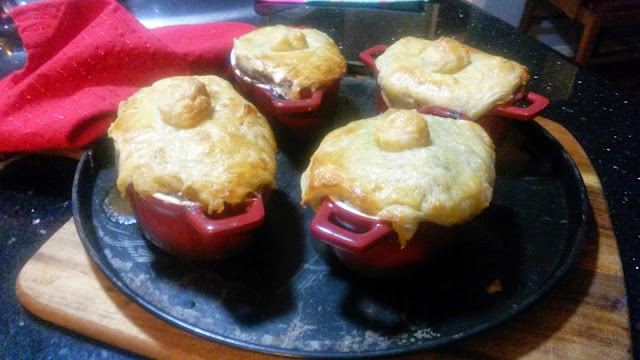 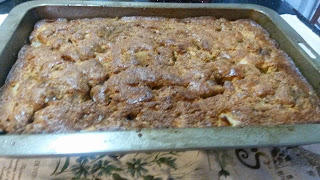 Ten days ago I met Herman the German. He is a sourdough cake, who starts life as a sourdough starter, and grows on the kitchen bench for 10 days. He has his own website which can be found at:  http://www.hermanthegermanfriendshipcake.com/

My long term foodie friend Julia, visited me at home with some of her deliciously cooked Herman Friendship cake  and a portion of her Herman sourdough starter. I have stirred, fed and nurtured Herman all week, and on the weekend, Herman multiplied to four, and the cooking began. Two friendship cakes and a loaf of sourdough bread later, Herman is officially a member of the family. The cake is delicious and keeps well in the freezer and also makes a sensational dessert with the addition of cream, ice cream etc. 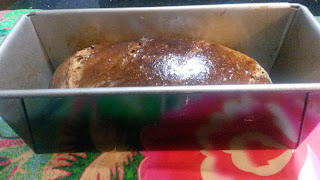 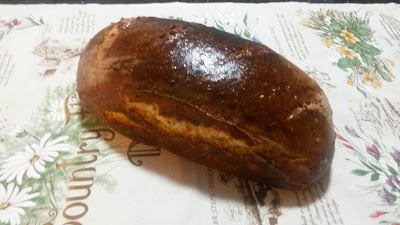 My sourdough bread exceeded all of my expectations. I followed Cheryl's advice from Herman's website, and started the kneading process after lunch, letting it rise overnight, and then cooked the loaf for breakfast the following morning, using half strong white flour, and half Laucke's Multigrain Soy and Linseed bread making flour. No bread maker involved. The smell of the sourdough bread cooking throughout the house early in the morning was heavenly. 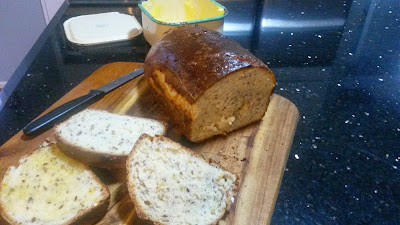 The recipe for the bread can be found at Herman the German's website.

Bake for 45 minutes at 170-180 deg. C. Test the middle with a clean knife. I find it cooks beautifully in this time, however you may need to cover in alfoil and bake for a further 20 minutes to ensure it is cooked properly in the middle.

In 9 days time, I will have four Herman sourdough starters, which means more bread baking  and other variations. There are lots of recipes available on his website. If you have always wanted to try a sourdough starter and make your own bread, this really works.


From the Herman the German's website: YOU CANNOT PUT ME IN THE FRIDGE OR I WILL DIE.IF I STOP BUBBLING I AM DEAD.

What a great idea to be able to give one away to a friend, accompanied by some Friendship tea cake.

Do you think dear Reader, that one of the nicest things in life is when a friend arrives unexpectedly with some home cooked goodies to be shared and enjoyed?