Enjoying the Mackay beaches with Locky, our Chocolate Border Collie and an iconic biscuit recipe 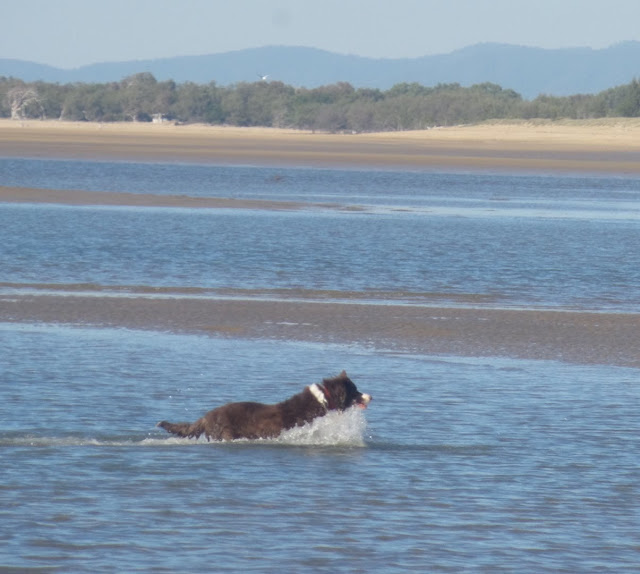 Meet Locky, our beautiful chocolate Border Collie, who is taking a sabbatical with us whilst our Perth family travel overseas to the Falkland Islands to work and live for a few years. An early morning excursion to Far Beach at South Mackay with Locky, who claimed the beach and the tranquil Coral Sea as his own. With a tennis ball to chase, he was in doggie heaven. 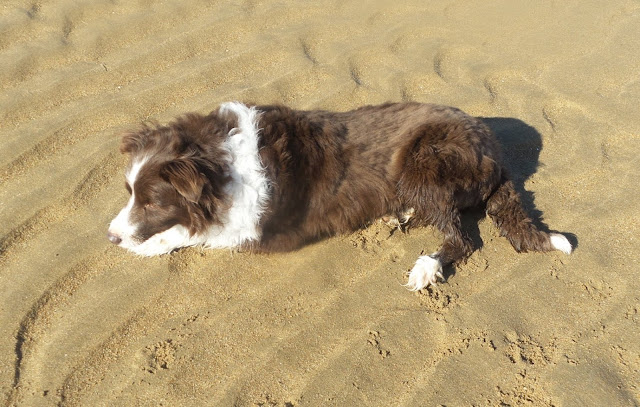 Locky is 8 1/2 years old, and the thought of him travelling by boat all the way to the Falkland Islands, undergoing quarantine procedures which are even worse and more stringent on the return journey, worried Mr. HRK and me so much that we offered to look after him whilst they are away. 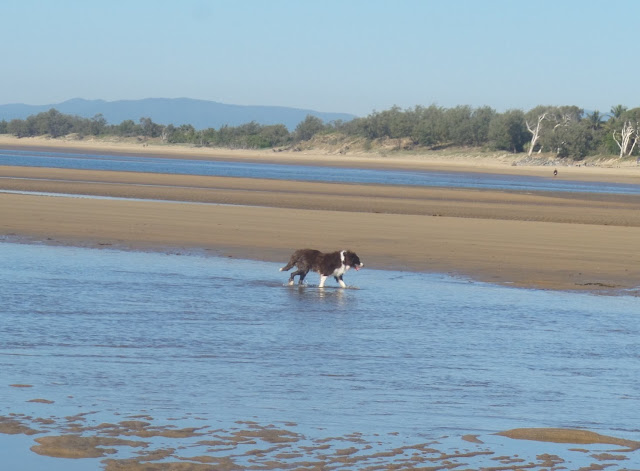 Locky not only looks very handsome, he also has a very placid nature and has adapted well to life on the North Queensland Tropical coast. After all he is originally a Queenslander being born in Brisbane. It's not as if he was coming to live with strangers as we have had a lot to do with him during many visits to Perth, and we also looked after Locky and Kali his sister, a black and white Border Collie during one of  our sons's overseas trips. Sadly Kali was run over and died a couple of years ago, so now it's just Locky and he is much loved and very precious to the family. 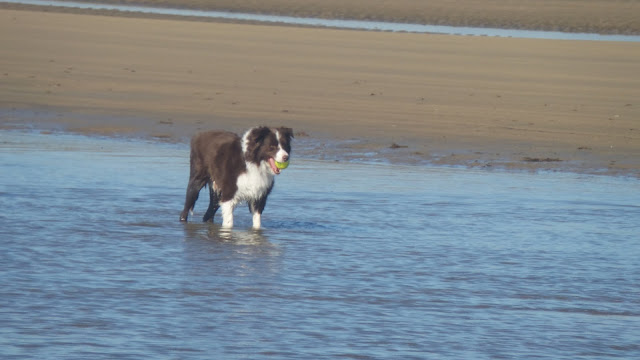 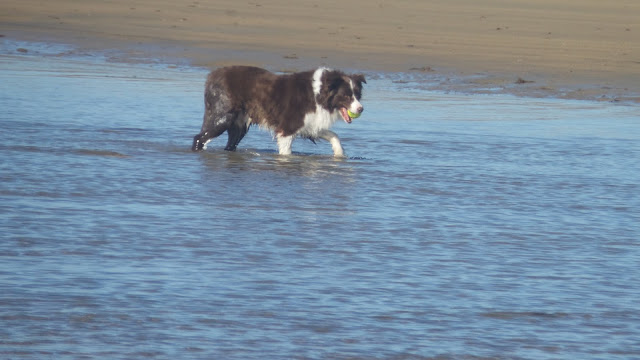 He flew back with us from Perth two weeks ago and handled the flight beautifully, after sad farewells.


One of the wonderful things about owning a dog is the exercise we find ourselves now doing.  Mr. HRK takes him for a walk around the neighbourhood on the leash most mornings, and I oblige most afternoons. He is very well trained in that regard. He doesn't bark at those other "naughty" barking dogs, and sits for us when its time to cross the road to look for cars before crossing, yes really :) 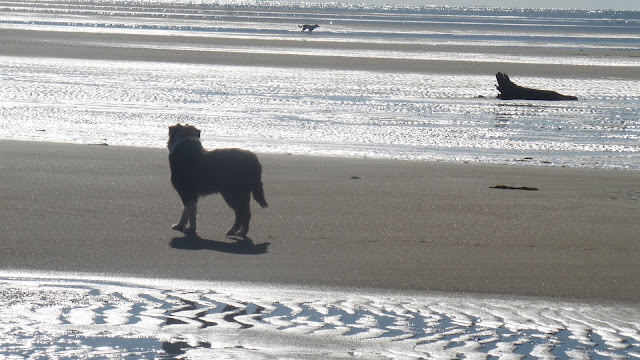 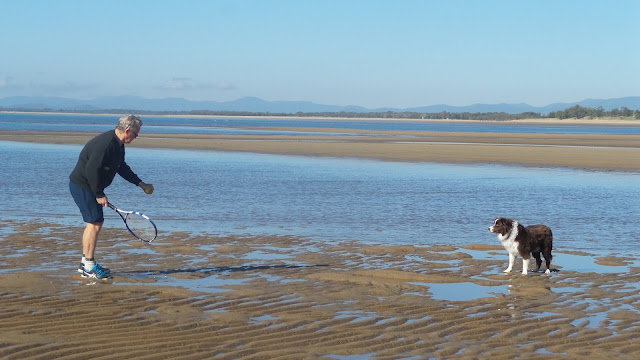 We can't throw a ball as far as we used to be able to so a tennis racket comes in very handy and gives Locky a good run. However being 8 1/2 now he has a bit of arthritis in his hindquarters so we have to be careful not to over exercise him. Good excuse eh? 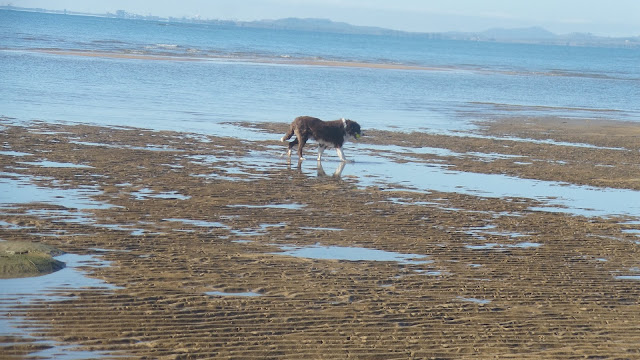 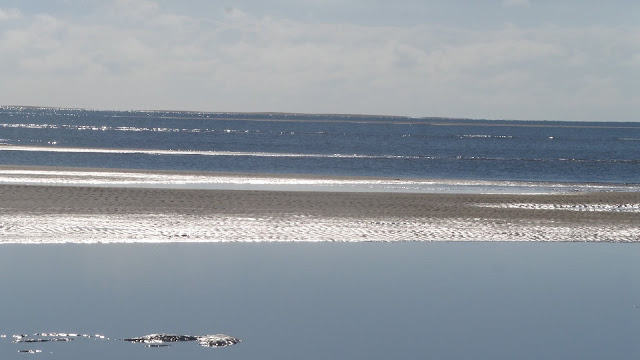 On this particular day at Far Beach the tide was in, it can go out for miles, so that was great for photos and also it's nice to be close to the ocean.

When Locky arrived home with us, he had a cold weather coat which needed some grooming. He seemed to enjoy his first haircut in the North Queensland sunshine. 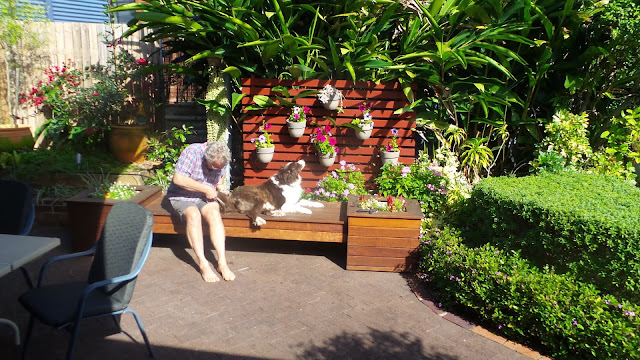 Below, with Locky at beautiful Black's Beach, Mackay, a doggie beach, on another outing 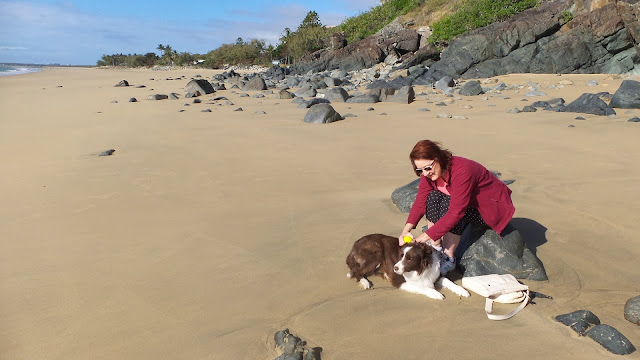 Speaking of exercise, when we were at Black's Beach, I noticed these Fitness Stairs recently built by the Queensland Government. A challenge for next time, perhaps? I'm sure there is a beautiful view from the top. 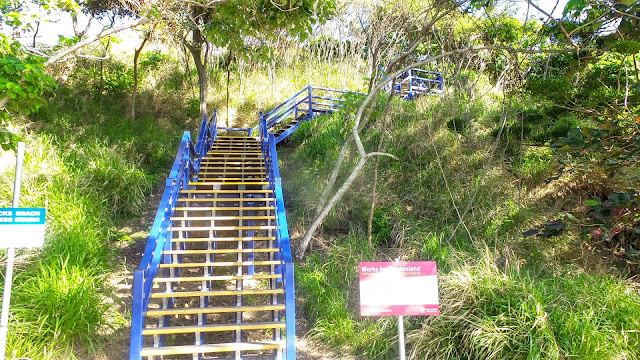 However my friends, besides hanging out with Locky,  I have also been quite busy in the kitchen, perfecting a batch of Anzac biscuits for posting, and making Passionfruit butter. I know that Anzac biscuits travel well, being the original reason that there were no eggs in this recipe, so I thought I would send a batch to Perth before our family leaves the country, a farewell care package, along with a few other things. My second attempt worked perfectly, this time using only 1/2 teaspoon Bicarb soda instead of a whole teaspoon, who would have thought there would be so many different recipe variations to this iconic recipe. Do you have a favourite one my friends that you bake on Anzac Day? Anyway I am now well and truly prepared for next Anzac day on the 25th April, 2020, ha, ha. I will be making bucket loads full of them. After all, before they were even called Anzac biscuits, this is the biscuit that was baked by the women left at home during World War 1, to be sent overseas to the Australian and New Zealand Army Corps soldiers. Much nicer than Bully Beef don't you think? The original recipe is available and can be downloaded for free here, if you are interested. This biscuit has a remarkable history. They are still a great fundraiser for the RSL and other groups around Anzac Day and continue to sell well all year round.


This recipe makes about 24 biscuits.

Oh what  difference a dog makes.