I'd like to share with you  my Vietnamese Pulled Pork recipe which we cooked a couple of nights ago and it was amazingly delicious, with the Char Sui Sauce being the secret ingredient. The flavours and textures of the Japanese Pickled Cucumber, the Pickled Ginger  and a Red Cabbage Asian slaw married perfectly with the flavours of the Pork and the sauce. Some sushi rice to soak up the fusion of flavours and we were transported to an exotic destination. We also made some Japanese dumplings for a starter and I will share that story with you soon.

I am feeling rather restless today as a nourishing and relaxing time with our daughter Shannon, at home, has come to an end for now. She is driving back to Far North Queensland, possibly a 10 hour drive depending on the extent of the roadworks and the number of trucks on the road. We will be on the phone every couple of hours today to check on her progress, as she has her phone set up in her car to be hands free. This is the first time she has driven this trip on her own, and I will feel a lot happier when I know she has arrived back safely. One of the hardest things about being a parent is knowing when to let your children fly their wings solo, even at 30 years of age. I was very tempted at one stage to drive back with her and then fly home, or at least accompany her to Bowen and then drive home. However she loves driving and seems confident to tackle the long trip alone with Nala her cat firmly positioned in the cat basket on the front seat. Anyway she has reached Bowen in record time and so far no road works or trucks, so far so good. I know she will feel a real sense of accomplishment when she arrives home safe and sound.

However she had a false start, when she realised she had left something important at home, so only half an hour down the road she had to turn around and come back for it. We just all laughed about it. Hasn't that happened to most people though at least once in their lives, when they have realised they have forgotten something important and have had to turn around and drive home to get it? It's surely not worth it though after half an hour on the road and can lead to divorce proceedings if pursued, LOL.

It has been a lovely couple of weeks though of cooking, baking, eating, outings, relaxing and watching a few TV show like Suits, laughing and just enjoying having her at home and seeing her wind down and start to relax. We also had her cat Nala to enjoy, and Nala settled in very well, and despite being very shy, investigated all of the clothes and linen cupboards if the doors were slightly open and ventured outside if the neighbouring dogs were quiet. Thankfully though she isn't a hunter so the bird life hasn't been in jeopardy, although the resident Peewees knew she was around and became quite aggressive.

So Shannon has gone home with a large box  full of frozen homemade meals and soups, her favourite being my Ham and Kale Soup. Chicken and vegetable soup,  chicken stock, curries, and leftovers from the Pulled Pork and Red Cabbage Slaw we made and various jars of pickled vegetables are all included. The aroma from the brandy in my Cherry fruit cake will probably waft though the car as well and smell like Christmas.  I think she is a chip off the old block and her Grandmother would be proud. This reminds me of when we used to visit my Mum in Rockhampton and we would always leave with lots of homemade biscuits and cakes and only a few survived to the end of the trip home, ha, ha.They were so delicious. 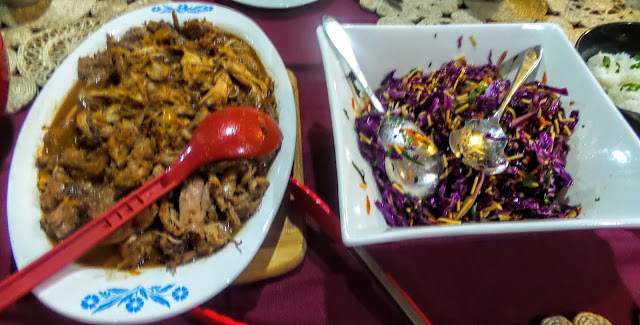 The pork can also be roasted in a covered baking dish at 110 deg. C for 8 hours. It is much easier though to use a slow cooker for this. 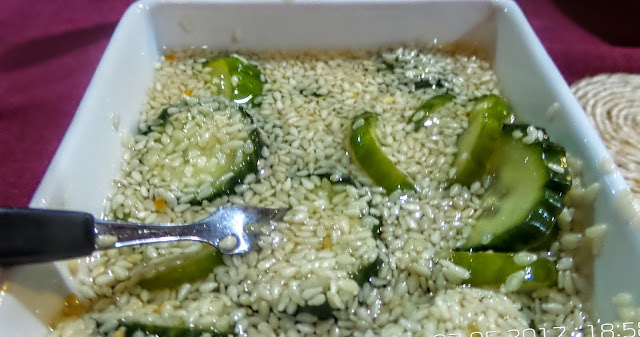 Wash the cucumbers and slice into thin rounds. To remove excess moisture, place the sliced cucumber in a bowl and sprinkle with the 2 teaspoons of salt, and set aside for 5-10  minutes. Rinse off the salt with water in a colander, and drain the cucumbers thoroughly.

Combine all of the remaining  pickling solution ingredients in a bowl.

Place the pickled cucumber in a lidded container and leave it in the refrigerator if possible for 24 hours. They will be delicious to eat then, but they can be made a few days in advance by which time the flavours will have really developed.

Bye for now my friends and thanks for stopping by. I would love to hear from you and I hope you enjoy these recipes.

Posted by HAPPY RETIREES KITCHEN at 22:59