The Importance of our Family and our Pets

This hasn't been the best of weeks.

We all have those weeks which we wish would end quickly and we could start again. I am generally a fairly optimistic and outgoing person I think,  but sometimes events happen which make you retreat into yourself, and just focus on your family, your home, and what is really essential.

Last Sunday started with some variety of stomach virus which laid me really low, and and left me after all of the action had settled down a couple of days later, only wanting soft boiled eggs and toast soldiers to eat, such a time honoured comforting classic with an upset stomach, and sweet mandarins for dessert. Does anyone else remember having soft boiled eggs and soldiers when they were growing up? Such a treat. I still haven't had a cup of coffee since the weekend, only cups of black tea, and this is definitely an indicator for a foodie that all is not well in the eating department. I even cancelled Tuesday Mahjong, and the delicious cake I had planned to bake. Sad but true.

However, that aside, yesterday we received the awful news that our beautiful Grand dog, Kali, one of our son's two Border Collie dogs in the Perth Hills, was badly injured. She escaped early yesterday morning before dawn from their property, decided to go for a long walk or probably a run in Kali's case being a Border Collie, and was badly injured but still managed to make it home and climb up on her chair at the front of the house and wait to be found. She survived 7 hours of surgery late yesterday and last night and now is still  sedated at the vet's surgery. Thankfully, there is no internal bleeding or organ damage but she has hundreds of stitches and staples across her chest, two teeth extracted, and her left leg has been repaired as much as possible but may require more surgery.


Needless to say, everyone is very shaken up and upset over Kali including me as we have spent a lot of time with the dogs and they are very much part of the family. Thankfully her brother Lockie, a chocolate and white border collie,  didn't decide to go along for the excursion as well. He is a lot more sedate in nature. However Kali is a beautiful and very affectionate dog, and normally very streetwise and obedient when we take her out walking. The vet thinks she has been hit by a car which explains her injuries.

When these things happen just out of the blue for no reason, it is certainly a wake up call for everyone, and often involves a lot of soul searching as to why it  happened. Family pets are an integral part of the family, but are also very perceptive to any issues surrounding them. They are animals though, and prone to impulsive behaviour when least expected. Who knows what Kali went looking for in the early hours, as they are locked up during the night and had only just been let out of the house.
Anyway I won't dwell any further on this, and hopefully she will be able go home tomorrow to lots of spoiling and attention.

Anyone reading this, who has pets knows that  having them is mostly very rewarding, however the unexpected is bound to happen sometimes, and sometimes there are tears.

So consequently, I have done next to no cooking this week, despite my best laid plans, had intended to do a lot more blogging but haven't, have done some cleaning and washing and a little gardening but that is all. However it doesn't matter does it? All the rest can wait. The most important thing is to give support to my family where it is needed and be available to help if necessary.

Take care everyone and I hope your week is going well. To my friends who are reading this, I will try and catch up soon.

Posted by HAPPY RETIREES KITCHEN at 01:14

Email ThisBlogThis!Share to TwitterShare to FacebookShare to Pinterest
Labels: dogs, family, May

Date and Walnut Loaf Cake for an easy Afternoon Tea

Date and Walnut Loaf Cake Enjoy this Loaf Cake still warm out of the oven with a cuppa, or it will keep fresh for a few days in y... 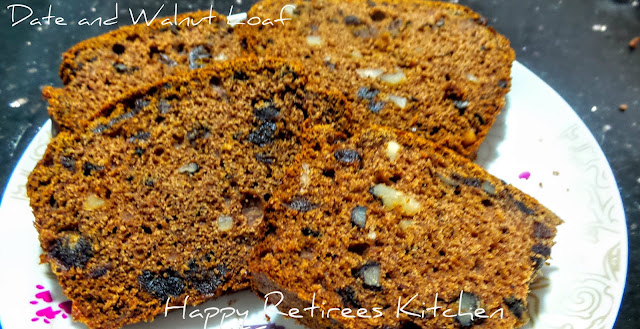