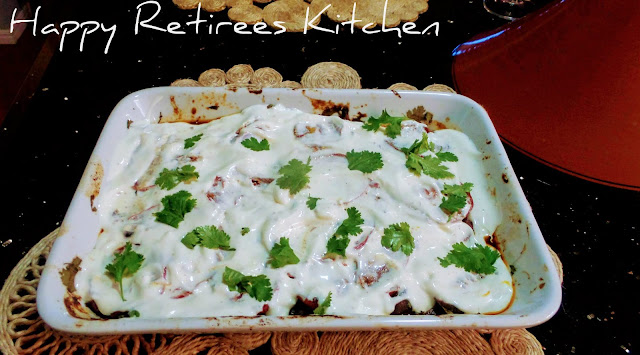 A rich, luscious eggplant dish, with so many aromatic Middle Eastern flavours, complimented by the combined flavours of Greek yoghurt and garlic salt. Even better, this is an eggplant recipe that Mr. HRK enjoys. When I discovered that I could grow eggplant easily, quite a few eggplant dishes appeared on my menus, perhaps I overdid it a little or maybe even a lot. He was struggling with them, so I gave in and had a break from eggplant for a while. He still struggles a bit with most eggplant dishes, but this is one that he finally really enjoys. Great news, as I love eggplant, and so do most of our friends. This is a winner! I hope you enjoy it as well. 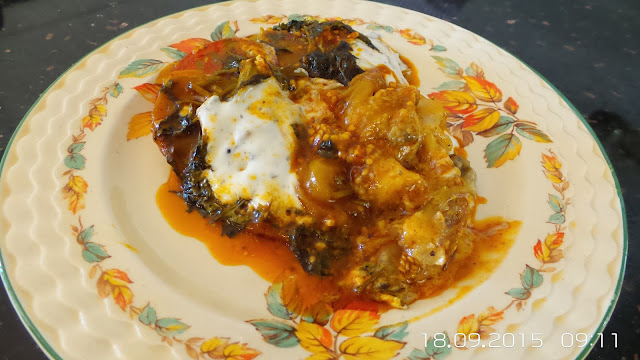 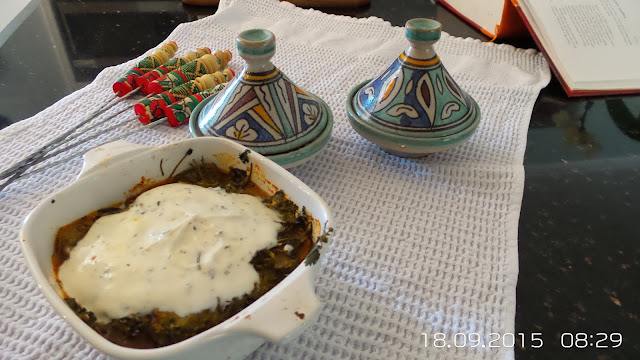 The eggplant needs to be sliced and cooked until it is soft. Slice off the ends of your eggplants, and cut them in half lengthwise, not across. Then cut each half across in 1/3 inch thick slices. I fried the eggplant in batches in a medium heat frypan in olive oil, being careful not to burn them or you can cook them under your oven grill as follows.

Turn on your oven grill. Slice off the ends of your eggplants, and cut them in half lengthwise, not across. Then cut each half across in 1/3 inch thick slices.Arrange the eggplant slices on two baking sheets on baking trays, drizzle with 1 tbsp. of the olive oil and sprinkle with 1/2 tsp. of salt. Place the baking trays under the grill and cook for a few minutes on each side until lightly browned. Remove from the oven and adjust the oven to  a moderate heat, 180 deg. C, or 375 deg. F.

Heat the remaining tablespoon of olive oil in a medium pan and saute the garlic over medium heat for about 2 minutes. Be careful not to let it brown. Add the remaining spices, 1 tsp. garlic salt, turmeric, curry, paprika, pepper, and tomato paste. Stir this mixture together and cook for another minute. Add the chicken stock to the pan, stir, and turn the heat to high.When the liquid comes to the boil, turn it down and let it simmer for 5 minutes, stirring regularly.

Pour 1/3 of the liquid into a 9x12 inch baking dish, or even a bit smaller, spreading it across the bottom of the dish. Arrange half the eggplant on top of the sauce. Sprinkle half the coriander over the eggplant and then layer the tomato slices evenly on the eggplant. 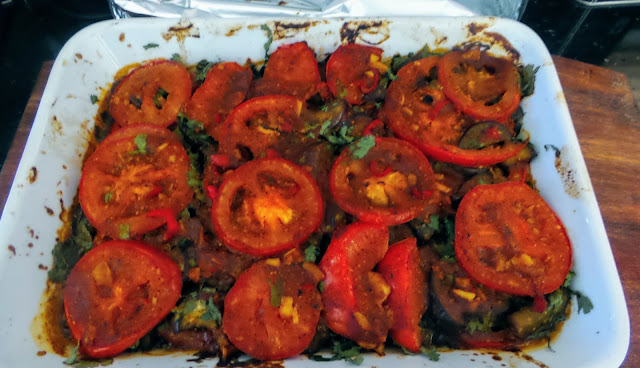 Pour on another third of the sauce. Repeat the layering with the remaining eggplant, coriander, and tomatoes. Finish the dish by drizzling the last of the sauce over the vegetables, ensuring that all the vegetables are covered.

Cover the dish tightly with aluminium foil and cookl it in the oven for 40 minutes. Remove the foil and cook for another 5 minutes. 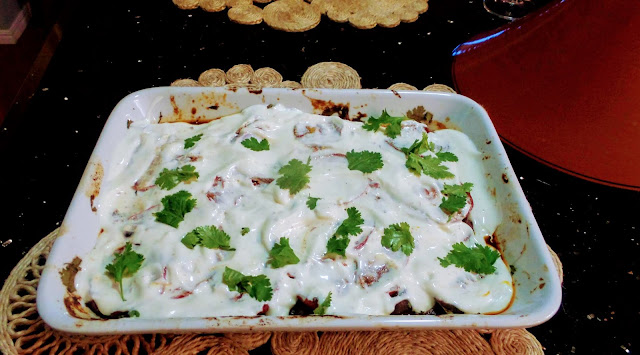 Mix together the Greek yoghurt and garlic salt. Pour the yoghurt sauce over the eggplant and serve with pita or naan bread.

Serves four to six people as a main, or many more as a vegetable dish on the side.

Adapted from a recipe by Zohra Ghilzai.


Posted by HAPPY RETIREES KITCHEN at 19:13