Extracting Sweet Honey from our Beehive for the First Time, it's been a buzz. 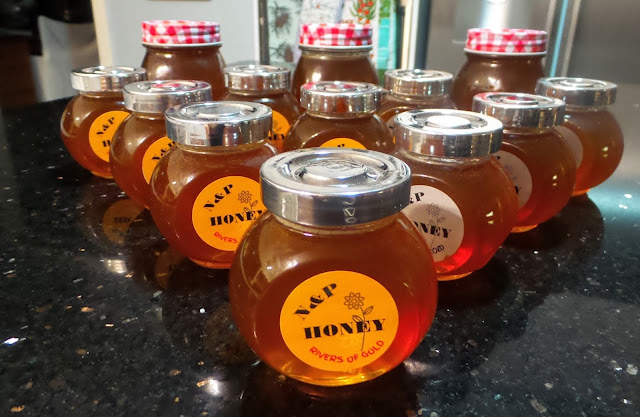 It's Bee day, and after 10 months of Beekeeping, relocating our beehive and monitoring it's health,  we are ready to rob the hive (in the most gentle way) of it's golden, pure and beneficial honey.

First things first though,  the hive needed to be smoked  to calm down the bees as removing the frames containing the beeswax and honey was going to disturb the hive and upset the bees. 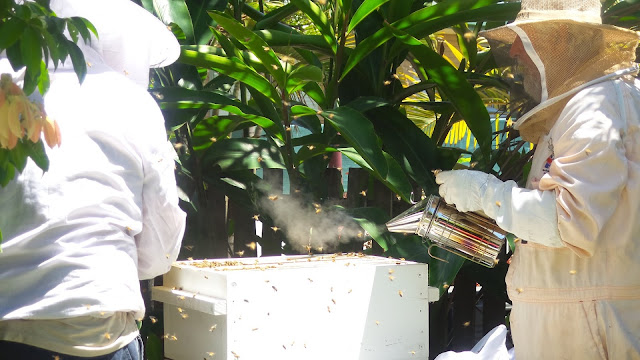 Mr. HRK and his bee buddy Bruce, decked out in protective gear, set to work smoking the hive and assessing the frames to determine which ones were ready for collection of the honey. 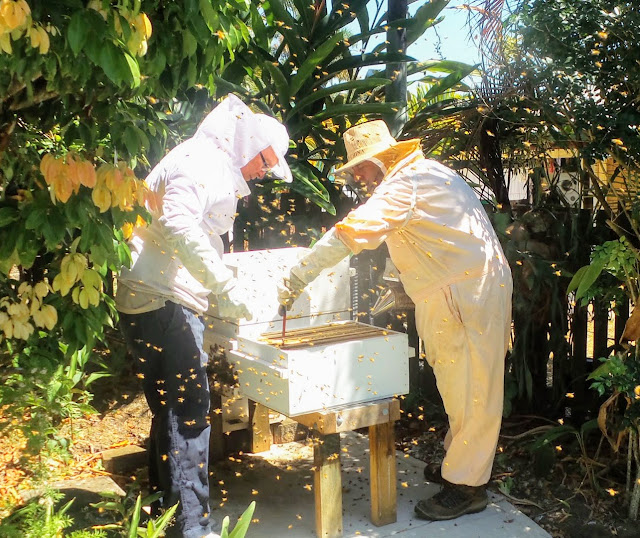 Each frame needed to be inspected individually on both sides to determine whether it should be removed from the hive and used for honey. This frame was full of capped honey cells and could be used. The aim is that a frame should be  at least75% capped before harvesting it for honey. In tropical areas where the humidity is high, it is essential to take only combs which have been fully capped. Whilst we don't have high humidity levels here yet, it is still an important rule to follow. 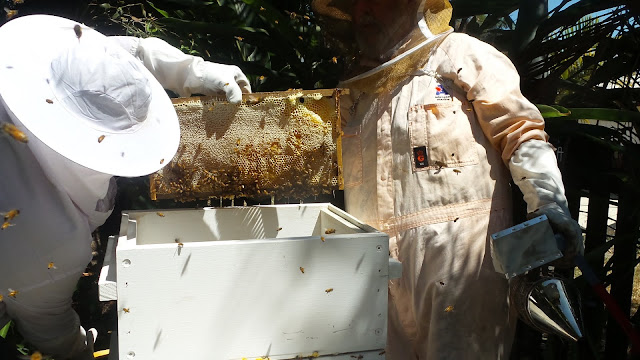 Throughout this story I will be talking about honeycomb and beeswax. Just to clarify, honeycomb is the structure of hexagonal cells made by the bees mainly of wax (beeswax), which will hold their larvae and store the honey to feed the larvae and themselves, in addition to the pollen they collect. Beeswax is the wax secreted by the bees from which they make the honeycomb. Once the honey is removed from the beeswax by the beekeeper, the wax can then be processed  and used in the manufacture of many products.

Before removing the frames the bees need to be removed from the frame. The simplest method of removing the bees from a frame is to apply smoke, remove the frame and then shake the bees off into the hive.  The remaining bees can be gently brushed off with a special brush. That is what Mr. HRK is doing in the photo above.  After each frame was assessed and Mr. HRK and Bruce decided to use it, they were removed to a separate box and covered with a towel so that the bees wouldn't follow the direction of the frames. Yes the bees will follow their precious honey once it is removed from the hive. 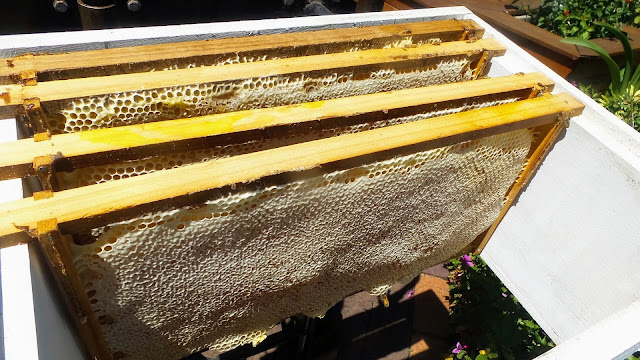 These are closeups of the honeycomb frames removed from the hive. 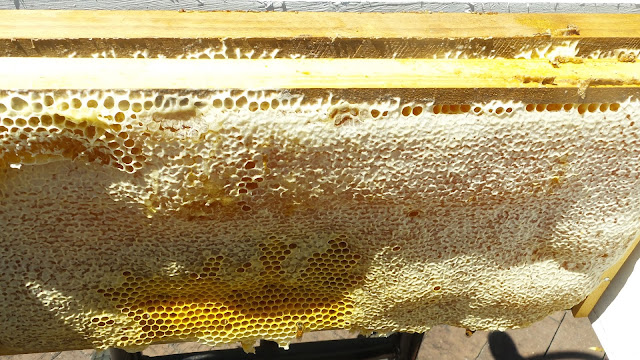 After the frames not to be used were placed back in the hive and the hive closed up, four beeswax frames  were taken to Mr. HRKs workshop for some serious scraping down of the frames. 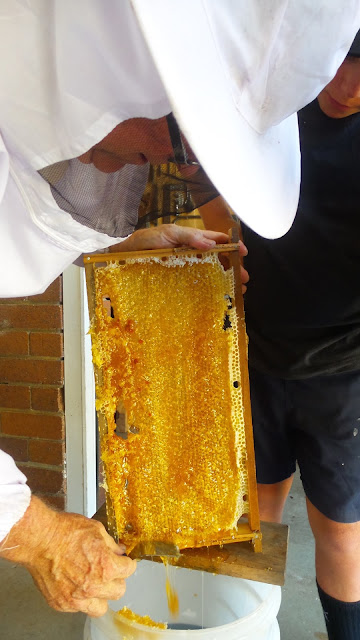 This proved to be the messiest part of the whole process for us. Next time we will use  layers of cardboard on the concrete below to catch the drips and then the cardboard can be placed in the compost heap to complete the recycling process. Live and learn. 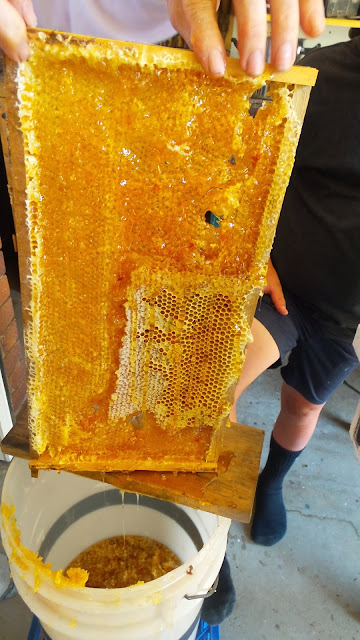 This proved to be quite hard work as frames covered in luscious honeycomb are heavy. The bucket collecting the honey and honeycomb was soon moved onto a milk crate so that Mr. HRK wasn't bending down as much and each frame was gently scraped with a special scraper so that only the capped cells were removed. He's trying not to scrape the foundation wax, note the holes oops! 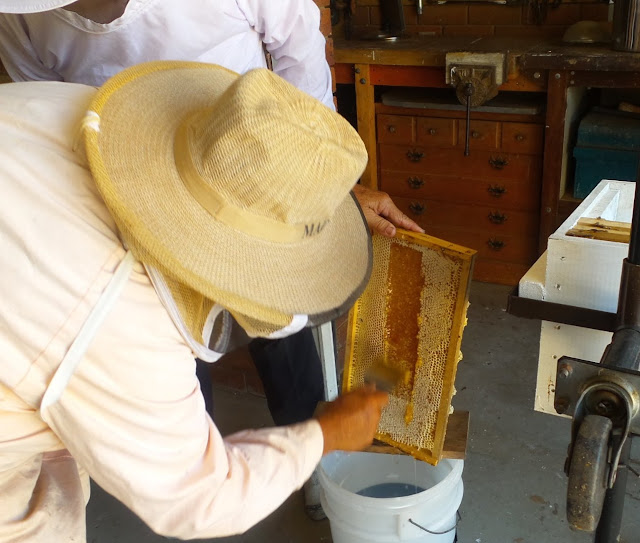 Frames that are scraped this way and put back into the hive with honey still on the foundation are called "stickies" or a sticky. Not to be confused with a nice French dessert wine!! 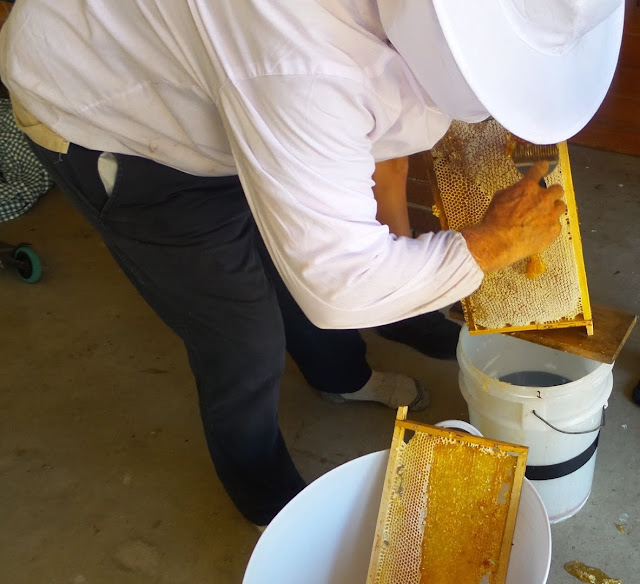 Our young friend Dylan who lives nearby is supervising the process. 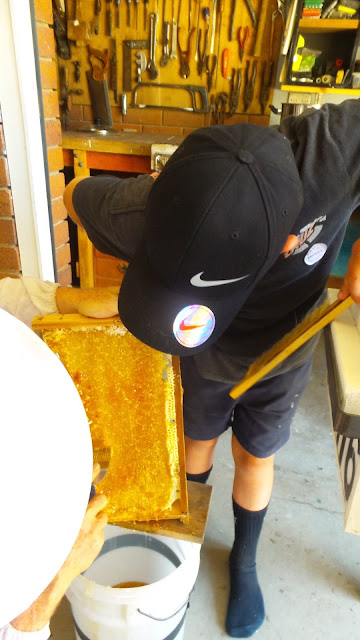 It will take about 3 weeks for the bees to clean these stickies up and start building new comb. The honey left on these stickies is after all the bee's food source so we wouldn't want them to go hungry.

The bucket of honey and beeswax was then covered and placed in the sun to warm it up so that it would be easier to separate and strain. Some of the moisture will also evaporate off.

The beeswax and honey was strained through two colanders, and then through a washed stocking into a large pot. Here's Dylan helping Mr. HRK to strain the honey. What a very helpful assistant he was.

Quite a few adult beekeepers that we have met were exposed to beekeeping in their family at an early age and developed a passion for it. 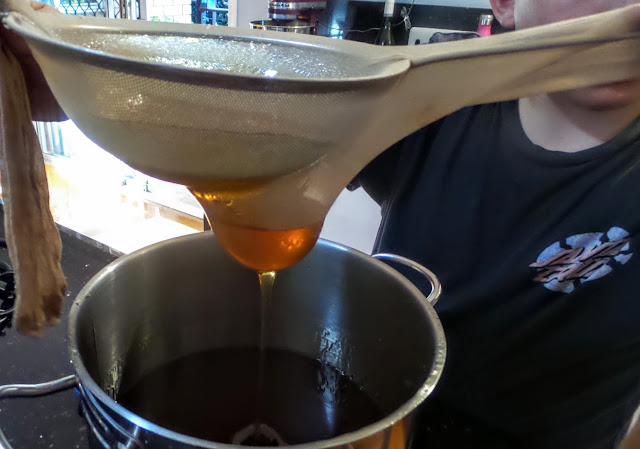 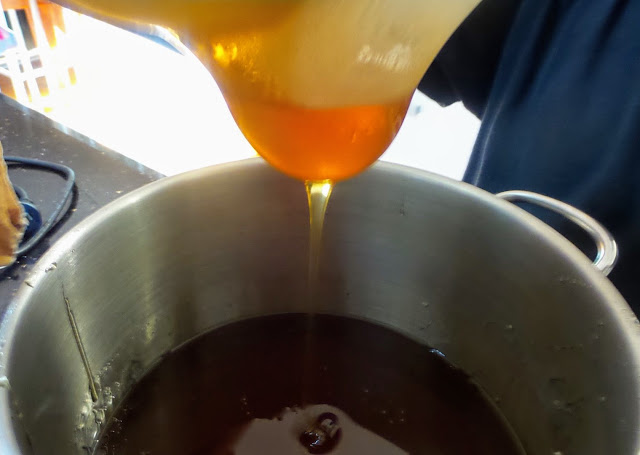 We now have a pot of  golden and pure honey.

The remaining Beeswax then needed to be rendered. Mr. HRK boiled it in water, to purify it and the beeswax then floated to the top as it cooled. 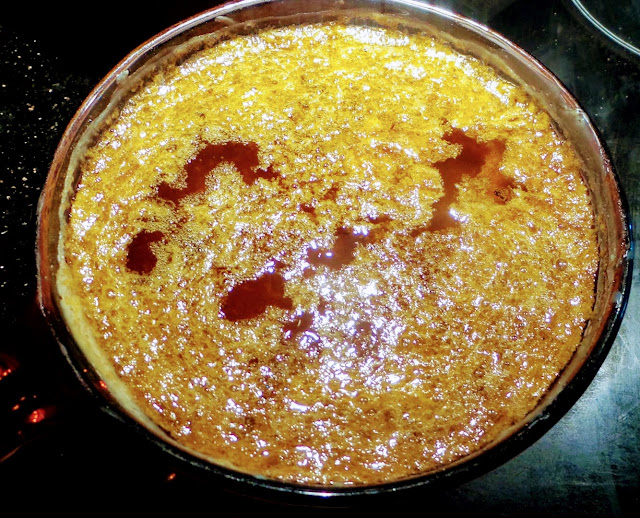 Below is the circular disc of beeswax waiting to be stored. It will still need to be processed further before it can be used. I am looking forward to using the beeswax in lots of interesting ways. In the photo you can see a dead bee that has been caught up when the honey was being extracted. Throughout this process, unfortunately it is inevitable that a few bees will be stuck in the honey. 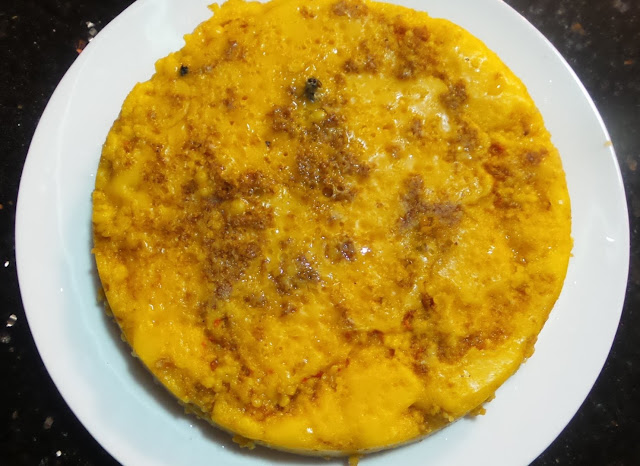 Removing the frames and then replacing them causes the hive to become quite messy with some comb and honey dripping on the walls of the hive making it difficult for the bees to work in there as they can become stuck to the honey. Bees are very clean, tidy and meticulous about the state of their hive, and for the next few days the workers will be very busy cleaning up the hive so that their mates can get back to work making more honey.

Meanwhile the bees have to wait somewhere for the housework to be completed  so a lot of them are waiting outside until they can enter the hive again. This only really occurs late in the day and during the night, as during the day they are out foraging.

They also need lots more moisture than usual now, as they will use it to clean the hive and now there are bees drinking all day from our bird bath. We haven't seen them doing that before, and the weather is also warming up.  It is also quite interesting to observe how they are scaring the birds off from using the bird bath. It is a takeover by the bees. It is so interesting that our regular birds such as the Willy Wagtails, the Blue Faced Honeyeaters, the Friar birds, and Pee Wees who are naturally territorial  are daunted by the bees. Nature is amazing.

Everyone needs a little bit of sunshine and water, our garden does, our birds do and so do our bees.


This time we harvested 6 kilos of honey from 3 1/2 honeycomb frames. We will now need to check the other frames in a couple of weeks as more may need to be harvested. Meanwhile our family and friends will benefit from a free sample of our honey. Mr. HRK and I think it is amazing honey, and  a consequence of our bees sourcing pollen from a variety of trees and bushes in our local area, as they can travel up to 5 kilometres to feed.

I would love to hear from you if you are reading our bee story and tell me of your bee experiences or even ask questions if you wish. We don't call ourselves experts by any means,  we are just learning as we go and are very fortunate that friends like Bruce and Keith have been very generous with their time and information along the way. Mr. HRK is the real expert but I am learning a lot as I try to write this story and take the photographs. The sharing of information among people who share a common passion makes the world go round. The method used to extract the honey in a tropical region like ours will be different to that used by beekeepers in cooler regions of the country. I have also tried not to use too much technical language about the processes, it will possibly creep into our bee stories along the track.

There is a comments box at the bottom of my blog however if this won't work for you, you can safely email me directly through the email search box on the right hand side panel on this blog. Just scroll down until you see it.

To my blogging friends I am really behind with reading your blogs which I love to do. Hopefully I will get to them soon.

The first story I wrote about our beehive back in July was very popular and can be found here.

Posted by HAPPY RETIREES KITCHEN at 00:39