How to make Aussie Campfire Damper in a Camp Oven, simple and rustic 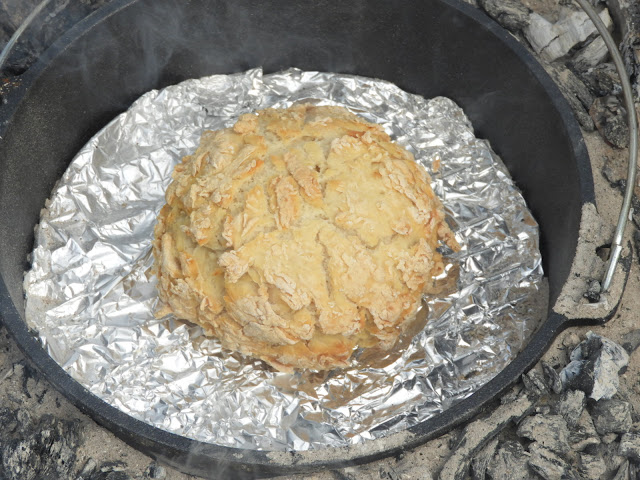 The weather in the Tropics started cooling down recently, so we went camping in the Great Outdoors. To make a damper in a Camp Oven, there first needs to be  a roaring, crackling evening campfire, which then burns down overnight to a bed of glowing, red hot coals. This can take all night, although someone might need to add a little more wood to the fire around three o'clock in the morning, so that it doesn't burn out. That would be a travesty, as we were depending on those perfect hot coals to provide the setting to make a bread damper for morning tea.

We're home now after an enjoyable camping holiday at Blencoe Falls and Murray Falls in Far North Queensland, followed by a road trip to Cairns and Cooktown.  One of the highlights of the trip for me was breaking in their new cast iron Camp Oven with Shannon and Dan and experimenting with making  a campfire Damper. Mr. HRK and I have both made damper  a long time ago when he was in the School Army Cadets and I was in the Girl Guides, the technique is still much the same, not that I can remember much about way back then LOL. When we camp, we enjoy the luxury of very comfortable and warm beds, great sleeping bags, comfortable chairs, a good if quite antique BBQ stove and a great tent. We also have a very good car frig so we can take a lot of food with us, which often includes pre-prepared frozen meals which only require reheating in a pot. Breakfasts are cooked from scratch, after all an Aussie brekkie of bacon, eggs, tomato, toast and perhaps sausages are a must.

This is the view of the river beside our campsite, very easy to enjoy. 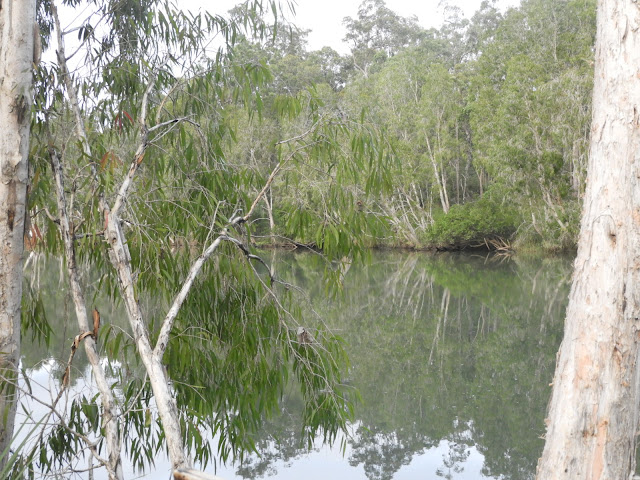 We set ourselves a challenge to cook a perfect damper by the end of the camping trip. We had four days and made four dampers and were very happy with all of them really, but the last one was as close to perfect as we could get.

When you work damper too much, all of the air is pushed out, and the damper becomes dense.The perfect damper is golden and crisp on the outside, fluffy on the inside, and dripping with melted butter and golden syrup. However you might prefer honey, maple syrup, or your favourite jam. The first two were made with 1 cup of plain flour and 2 teaspoons of baking powder, as I had run out of SR flour,  however they didn't rise as much as I hoped. We purchased some self raising flour at the very good IGA supermarket in Cardwell, on the way to Murray Falls,  and that made all the difference. I don't think the baking powder, which was fresh by the way, was dispersed through the plain flour enough to act as a rising agent. It needed to be sifted through. So from now on, Self Raising flour it is. 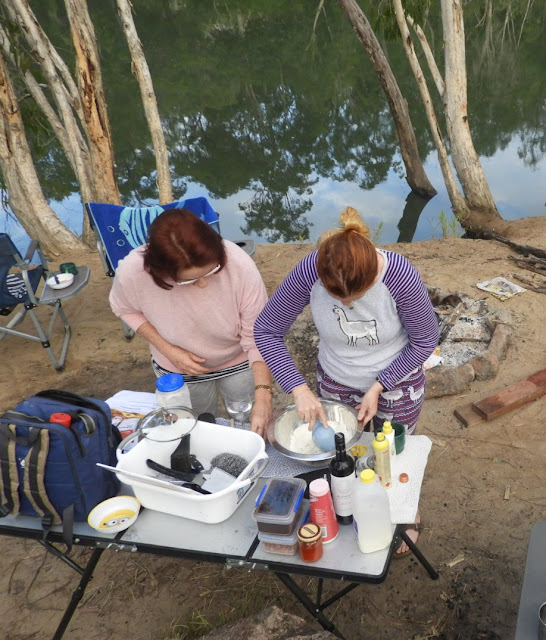 Shannon and I are making the damper in our outdoor and very happy camp kitchen. 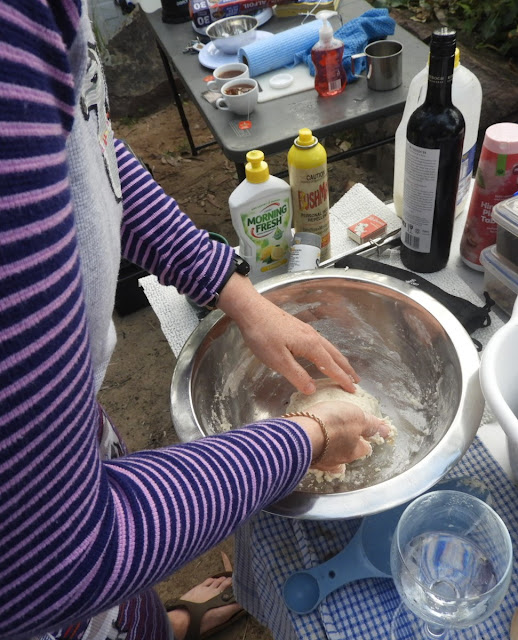 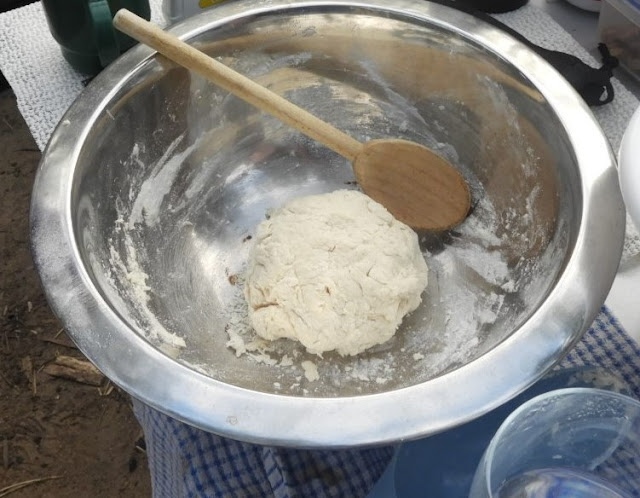 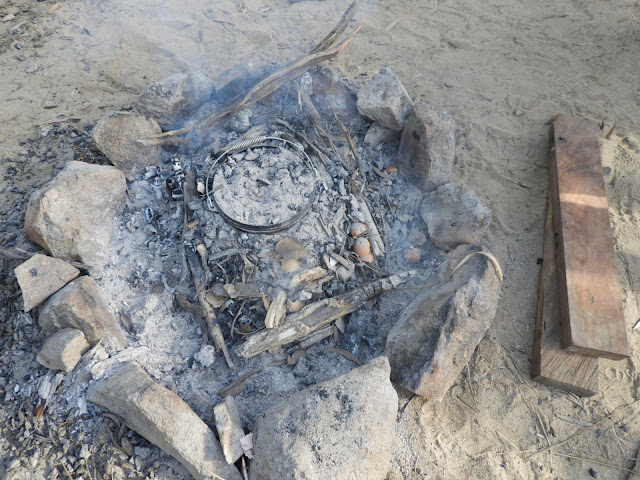 (Heat beads could also be used if you needed to. If using heat beads, a rough estimate would be to use around 10 heat beads on the bottom and 14 on the top of a 9QT camp oven. )

Our first damper is ready to eat and it's pretty good. It could have been slightly browner though. 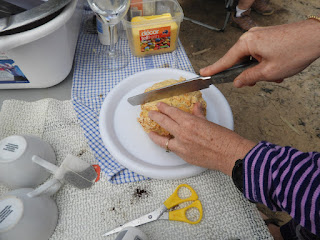 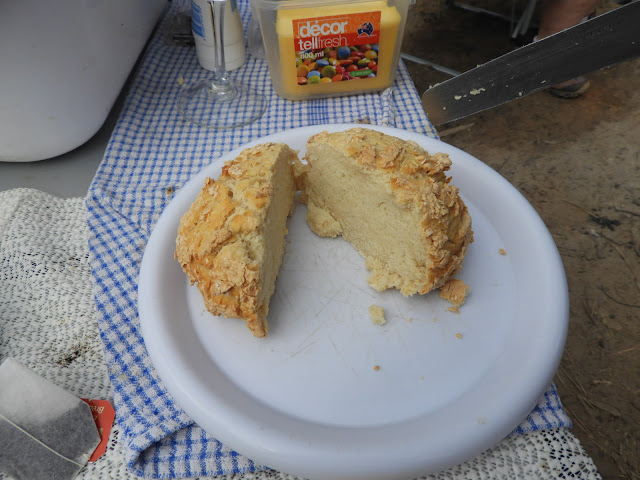 The second Delicious Damper we cooked was left in the pot longer, and was crispier on the outside and quite fluffy inside. It was all eaten. This quantity was enough for the four of us for morning tea, 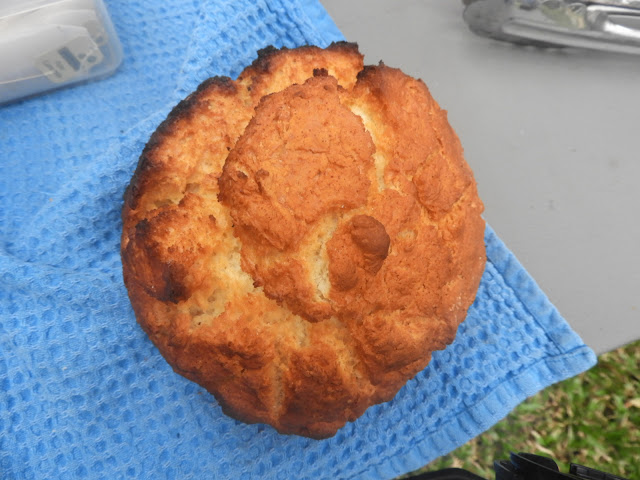 Mr.HRK loves camping and is having a wonderful time in his camp chair beside the beautiful creek eating hot damper, smothered with Golden Syrup. 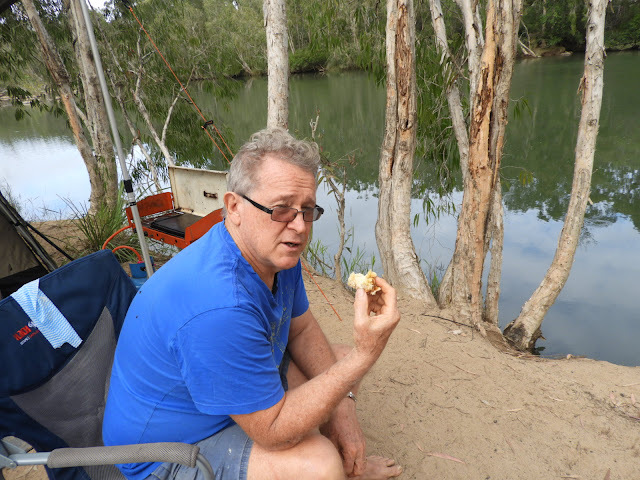 Now the real fun begins. The men decided that perhaps the coals needed to be hotter with a little flame as well and that we should leave the damper in the pot a bit longer to crisp up more. I was filled with scepticism, however it was soon forgotten as we went swimming in the beautifully clear but chilly creek open to the public which flows from Murray Falls. I could smell the damper before I saw it and knew it was charred on the outside, which can be how damper turns out in the best scenario. I think this charred damper reminded Mr. HRK of his school cadet damper days, and not to be deterred he scraped off the burnt bits, and surprisingly the inside dough tasted amazing.

So we had four attempts at making damper, all with slightly different results, but all delicious. We made another one after the burnt offering the day before and it was as good as it would get. Everyone agreed that a camp oven, on a bed of hot coals, with hot coals scatted over the lid and cooked for 25-30 minutes, yields the best results. Just increase the ingredients to feed a crowd of campers. Damper definitely needs to be eaten hot on the day of baking.

Blencoe Falls, in the Girringun National Park,  is one of the most stunning waterfalls in Australia, plunging 90 metres to the waterhole below, and then cascading a further 230 m to the bottom of Blencoe Gorge. It is located off the Bruce Highway, 110km south-east of Mount Garnet, and 90km north-west of Cardwell. We turned of at Cardwell in North Queensland and drove for two hours up the Kirrama Range Road through lush tropical rainforests, where we saw lots of small waterfalls escaping from the forest and an echnida on the road.

This is the view from the Kirrama Range lookout to the Coral Sea, overlooking lush sugarcane fields and farmland. 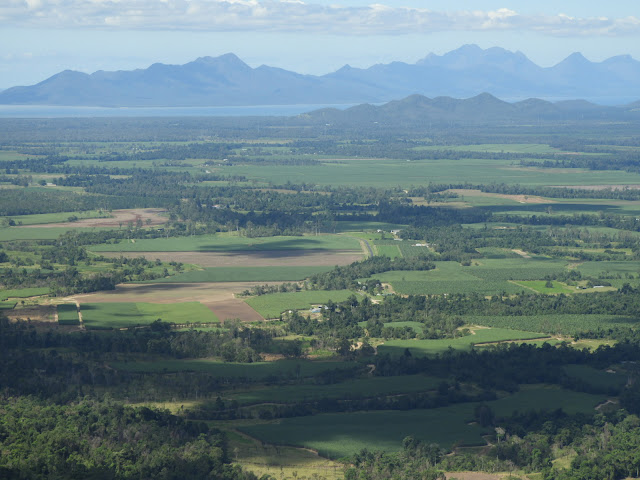 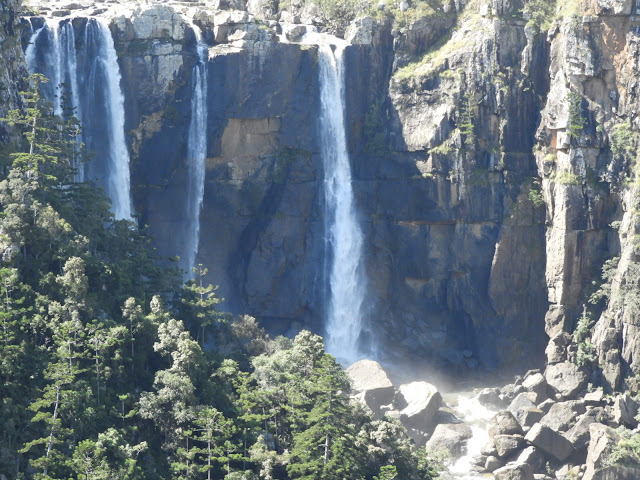 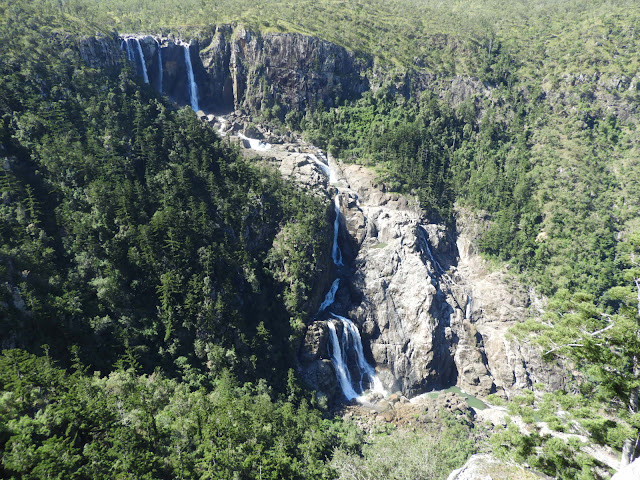 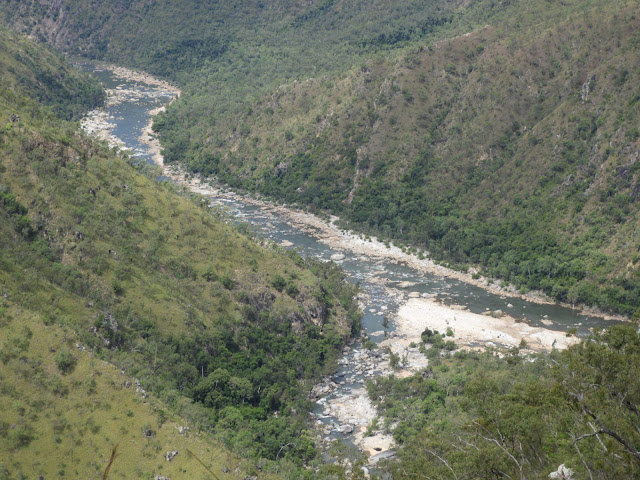 It's time for a picnic lunch of wraps, ham and salad, overlooking the Falls. 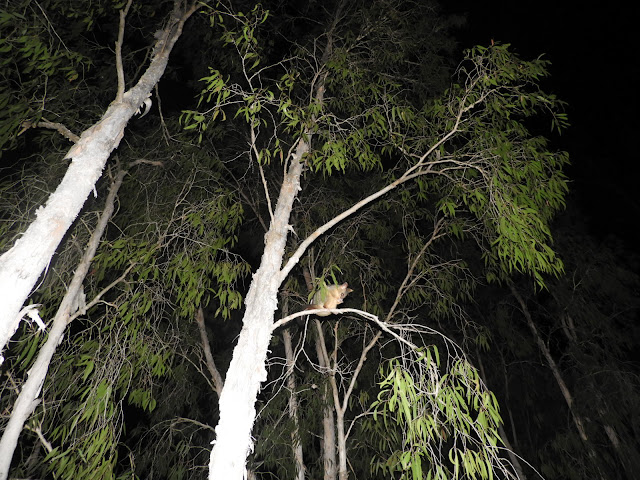 Murray Falls, located about 30 minutes by car North of Cardwell, look carefully for the sign, is a cascade waterfall on the Murray River. It is part of the UNESCO World Heritage listed Wet Tropics, on the Cassowary Coast. This was our second camping spot, and we loved it. The swimming in the clear mountain river below was chilly but invigorating and relaxing. 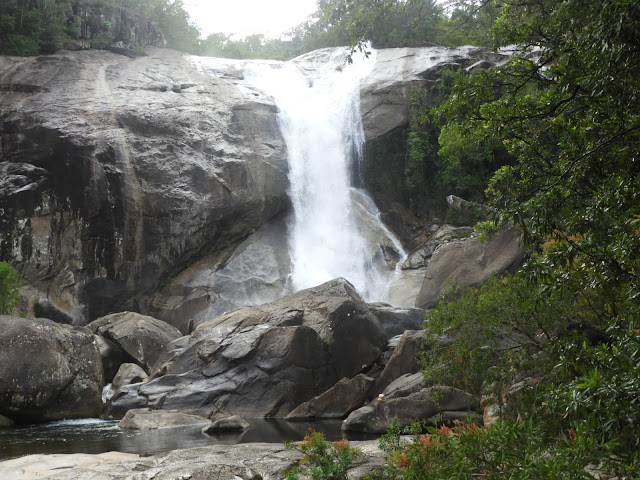 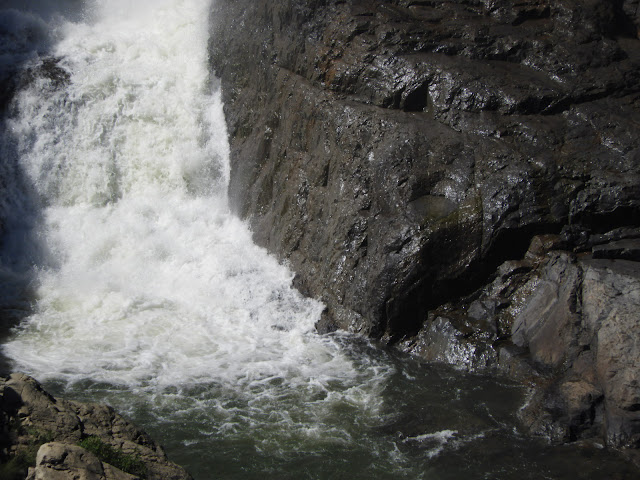 The river flows over naturally sculpted granite, which become very slippery. Trees and native plants  can be seen growing out of the granite. 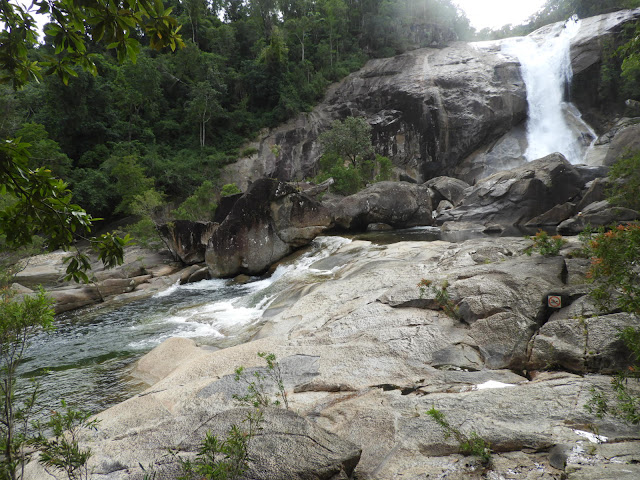 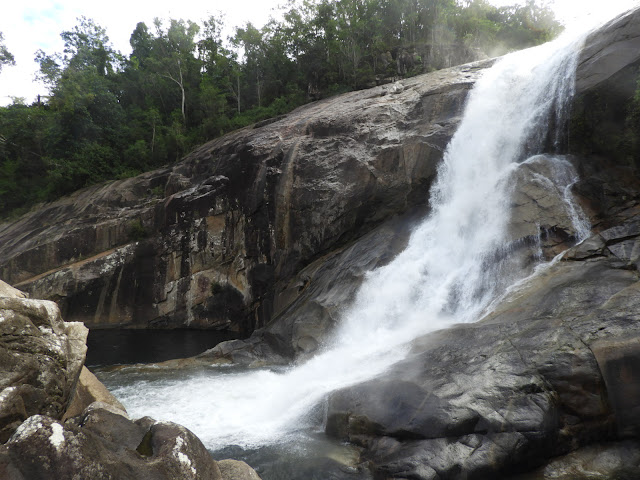 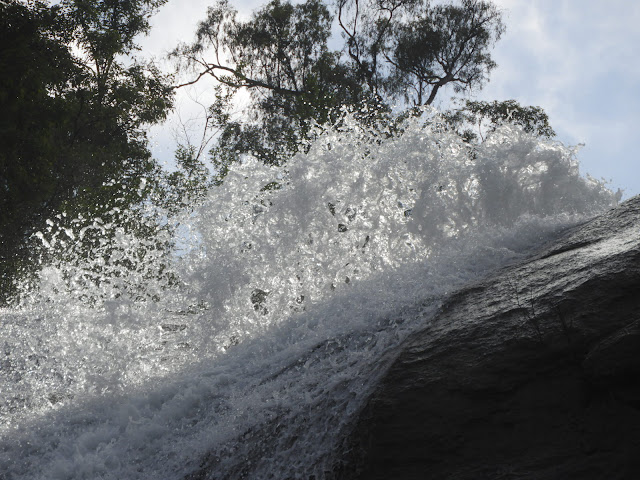 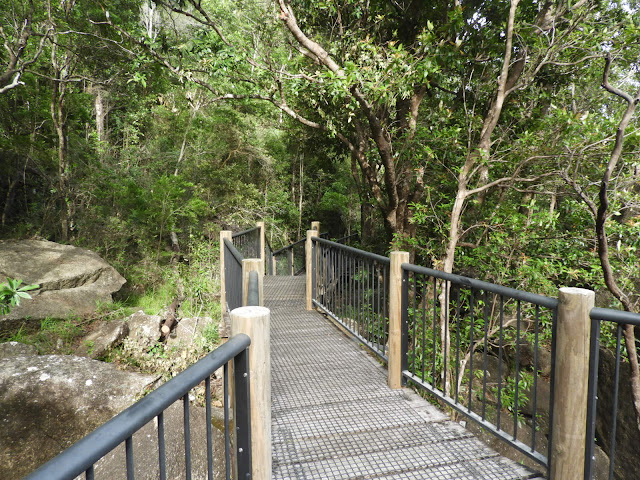 Did I mention the Cassowary Coast in the Wet Tropics where we were? Look for the blue in the photo below and you will see the Cassowary, a large flightless bird native to New Guinea and the North Queensland Wet Tropics. Yes we saw one. It is an icon but a sadly endangered species. We don't have many good photos of this very large native Australian bird as to get too close is to risk your life. He visited our campsite at Murray Falls each morning at Breakfast time and again for Dinner, hoping to be fed. To feed them is to risk a fine of $3,000.00 and also to risk your life as their large claws are lethal. Thankfully when we waved our arms at him and  told him to leave he left without too much resistance. I found our car was a good refuge when he came too close. However he is a beautifully coloured bird and it is still a thrill to see them in the wild. A tourist at the campsite next to us was holding a burger bun and thought she could have a game with him, however the Cassowary saw the bun and her as purely a food source and it very nearly ended badly. Dan to the rescue, and he rushed over and shooed the Cassowary away, after the very frightened young lady had already thrown the bun at the big bird. 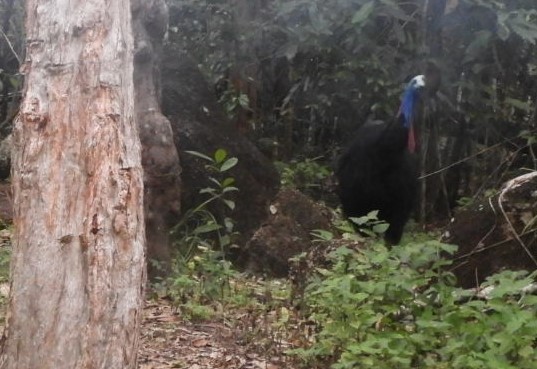 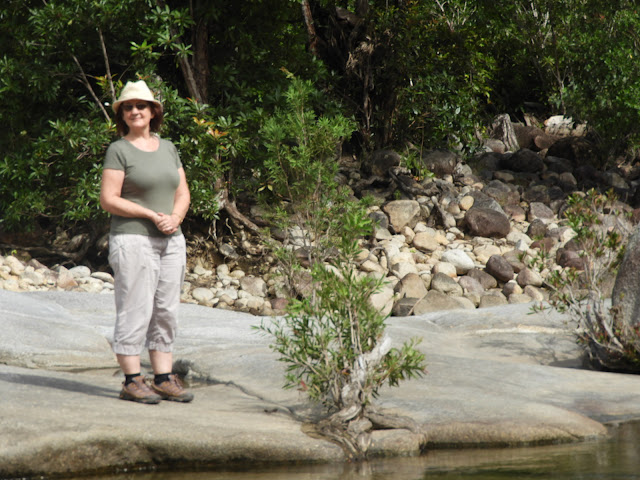 Here I am contemplating the tranquillity and beauty beside the  clear creek running off Blencoe Falls.

I hope you enjoyed reading about our camping escape into the Wet Tropics as much as I enjoyed sharing it with you. Have you ever seen a Cassowary in the wild and do you enjoy camping?


Posted by HAPPY RETIREES KITCHEN at 01:08 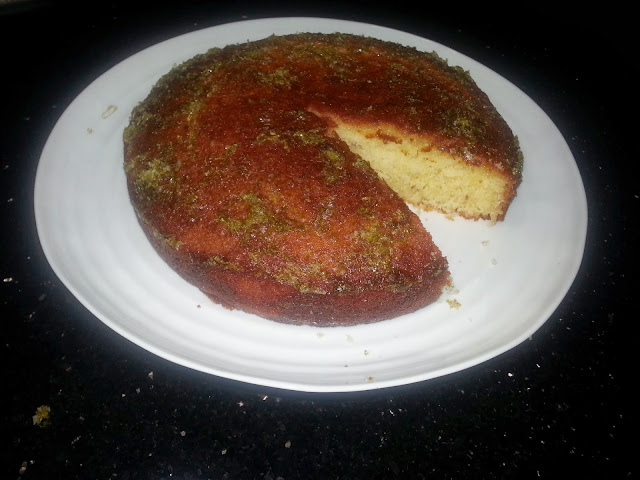