How to make your own pasta 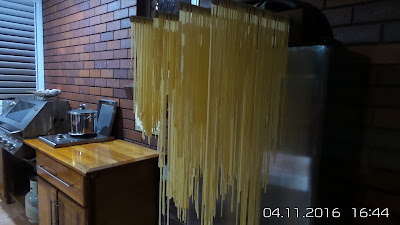 It's pasta tonight. We discovered late in the day that we would be having ten of the tennis folk for dinner because Lynne, our hostess for that night,  was unwell and as we are home we thought, well why not. So Mr. HRK volunteered to make pasta, bless his heart, which I welcomed and this meant I only needed to make the sauce and a salad. And of course a cake for dessert. So our cousin Judy's pasta sauce started cooking, as I always have those ingredients on hand, and around 4pm Mr. HRK commenced mixing the pasta dough. It was a rainy day and I wondered if that would affect the consistency of the pasta, perhaps it would make it gluggy? Neil doesn't worry about these things, and proceeded undeterred. The end result? Perfecto. Dinner was earlier than usual as it was raining, not ideal for tennis, but perfect for Italian food,  so  everyone arrived around 7pm to be greeted by the pasta already hanging on it's racks. Homemade pasta is such a crowd pleaser and a novelty and yet so easy, and it is such an economical meal to cook for a crowd.

As the Italians say, Mangiare e tutti i tuoi problemi andranno via, Eat and all your troubles will go away.

Besides being a really good pasta maker, Neil is also an inventor and quite a tradesman so he invented his own racks to perfectly hang the pasta on, which are under constant revision by the way.

After some wine and cheese, the pasta was placed gently in the boiling water in a large pot on the gas burner sitting outside near the BBQ, and after only a couple of minutes it was ready. It is so fast that everything needs to be organised to go, even before the the pasta starts cooking. 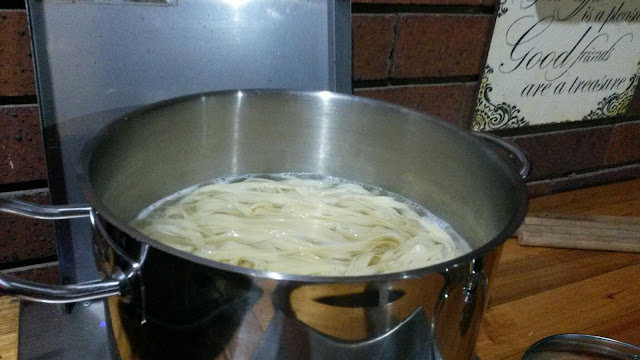 The pasta is then quickly placed in the colander, a little bit of olive oil added, and taken to the table very quickly and served up to our guests, with extra fresh basil for garnish.

As I write this, the American election is in it's final throes,with voting happening today, and a media fest is in place in the States.Thank goodness it will all be over soon. 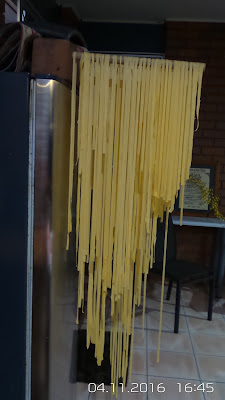 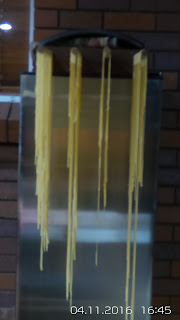 Make your own pasta from such simple ingredients:

400g fine Italian '00' flour (don't be tempted to use just ordinary plain flour)
4 eggs
(To serve 6 people, just double it for 10-12 people and freeze the dough that isn't required in glad wrap for using later.)
Method:

So my friends, have you ever made your own pasta, and do you prefer homemade pasta to the store bought packaged pasta? What is your favourite sauce to have with pasta?

Thanks to taste.com for the above recipe which works beautifully.
Find my favourite tomato sauce recipe here.
Serve it with Basil pesto. Simple. 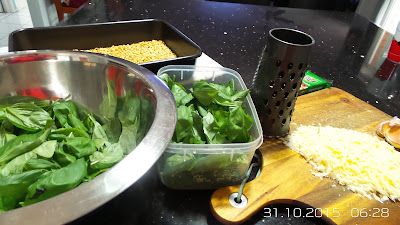 Posted by HAPPY RETIREES KITCHEN at 12:48